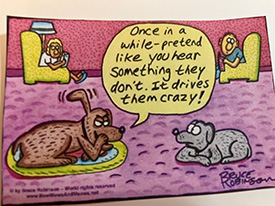 Duff here. Every now and again, I like to Stir the Pot. To Shake up Our Life just a tad. The regular Schedule can get Boring after a while, You know. I learned this technique from Ms. Brandy, a Predecessor of Mine. She was a Toy Fox terrier and had many Loveable Qualities. In the morning, She and Pepper would run from the Service Porch to the Bedroom, and grab whatever was on the Floor. It might be one of Mom’s Socks. But She specialized in Dad’s underwear. After gathering It up, She would fly through the House with Pepper in hot pursuit. Such joy! Living unstuck.

One Habit They both had was to go to the Living Room. And look up intently at the Corner. They would sit there for Some Time, just gazing and Listening with Ears perked. Mom and Dad would watch for a Time. Then get up and stand behind Them, to catch a glimpse of what They Heard. Not a peep to be heard. After a Time, the Two Pups would move along to the Next Adventure, leaving Mom both amused and Puzzled. That’s living unstuck.

How about You? Do You do Off Beat Things, every now and again, to amuse Your Family? Or are You on the Straight and Narrow? I say: Shake It Up. Live a Little. Tease a bit. It brightens the World, You know. Living unstuck. #unstuck-living#stir-the-pot

Sometimes the heart sees what is invisible to the mind.

Posted in World According to Duff