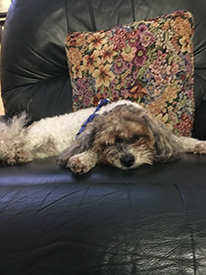 Duff here. I’m going to take You down Memory Lane. The Story of how I learned to Sleep Quietly in My Carrier is a Classic. To begin, I had been the center of the Universe for the Day. People cuddled Me. I was fed and Cooed over. Then daylight waned. It was time for the first Night in My new Home. Mom and Dad tucked Me into My Special Abode, wished Me a Good Night and went away. I listened intently. But the place was Silent, I tell You. No sound except some rustling of What were Sheets. I was definitely not living unstuck.

I began My Cute Puppy Whimper. First Softly. But there was No Response. I upped the Volume. I was Quite persistent. Then I heard Heavy Footsteps as My Doggy Daddy came to the Carrier. Finally, some Attention. Suddenly, there was a Huge Noise as the Carrier was picked up and dropped once, twice, three times. Right then and There, I decided: Silence was Golden. And all has been well Ever since. That’s living unstuck.

Are You like Me? Have You ever tried Something New, only to discover Your Behavior was Out of Line? I recommend: If You find your World being Bounced around, accompanied by Large Noises, quickly Back up and take another Look. Well worth a Second View. I know that For a Fact. Live unstuck. #unstuck-living#second-try

Whenever you are feeling stuck in your life, remember there are 1440 minutes in the day, which means you have 1440 chances to do something different to change your life.

Posted in World According to Duff